Over the past few years, Apple has significantly boosted the camera credentials of its smartphone lineup, ensuring that snapping and subsequently uploading a shot is as easy as it ever can be. Due to that very same reason, and the simplicity the iPhone offers when it comes to taking photos, Cupertino's smartphone reigned supreme in 2015 and was found to be the top camera used on Flickr. 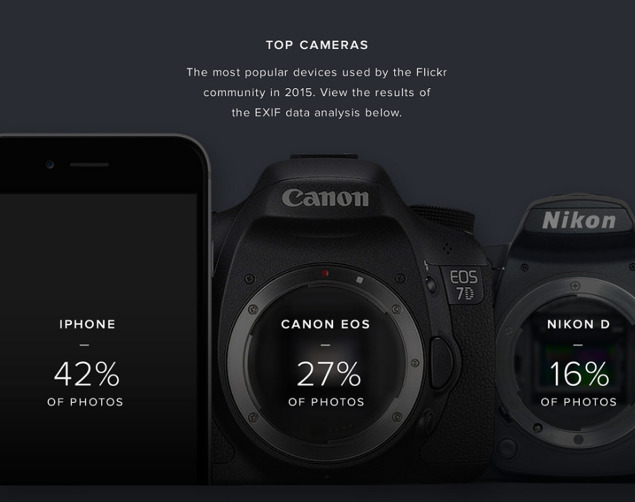 The iPhone Was Flickr's Top Camera For Year 2015

Flickr just recently published its 'Year in Review 2015' report, in which they break down which photos were the most popular on their network, as well as which cameras are the most popular. Interestingly enough, the iPhone sits on top of the food chain, with 42% of photos shared on Flickr shot using the Apple iPhone. On second place was the Canon EOS series of cameras, which was used to shoot 27% of photos, whereas the Nikon D series of cameras were used to shoot 15% of photos.

Putting the iPhone in particular aside, these numbers are actually quite interesting if you ponder upon them, as they reveal that people are ditching dedicated point-and-shoot cameras more and more for something more portable like a smartphone. While there are many people still out there who rely solely on a dedicated camera to get the job done, but you can't argue with the fact that the best camera is the one which is always with you, and in this case, it happens to be our smartphone.

Apart from the iPhone itself, smartphone cameras in general have improved dramatically over the last couple of years, giving users more control over what type of photos they want to snap under any given condition. In fact, if you compare high-end smartphone cameras to point-and-shoot dedicated shooters, then you'll come to realize that a smartphone is without a doubt a clear winner in a lot of cases, especially when it comes to portability. 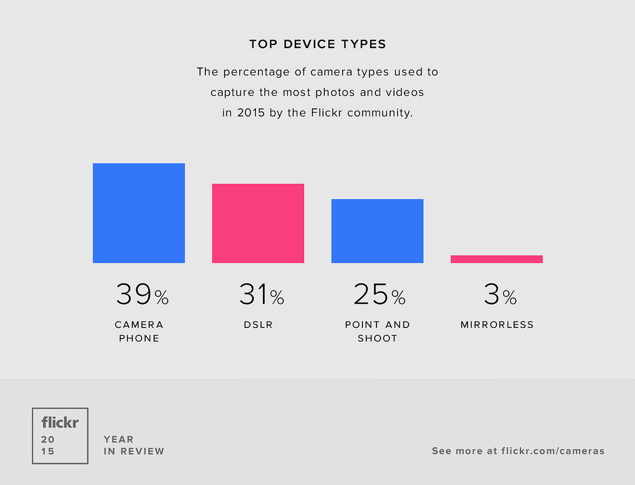 Flickr is a massive community where users share a ton of brilliant photos for others to see. While Facebook and other services such as Instagram have managed to make a dent on Flickr over the past few years, but Yahoo's Flickr is the go-to service when it comes to sharing of high-quality imagery along with the likes of 500px.

It would be really interesting to see which smartphone camera will come out on top by the end of 2016, as shooters on our phones have improved significantly this year alone. Maybe it will be the Galaxy S6? Or, the iPhone 6s Plus? We'll know for sure as we let time run its course.