Online retailer Newegg has an amazing Xbox One deal for those interested in purchasing Microsoft’s console. For $ 349.99 purchasers will receive a 1TB Xbox One bundle with 6 games. 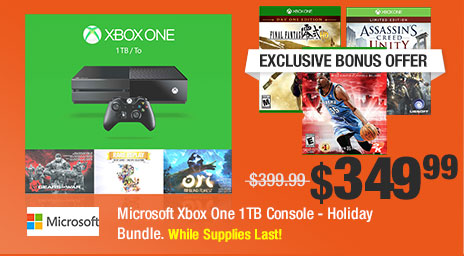 The holiday deal runs till supplies run out and is limited to 3 bundles per customer. This amazing Xbox One bundle includes a 1TB Xbox One console with the following 6 titles for only $ 349.99:

Assassin’s Creed, Final Fantasy, and NBA 2K15 are included as special offers, while Gears of War, Rare Replay, and Ori come bundled with the console.

Earlier this week we posted a nice Xbox One Cyber Monday deal at Target as well. Those interested in Xbox One software & console deals offered on the Xbox Store, can check out this post.